Between the Lines: Rest is Resistance by Tricia Hersey 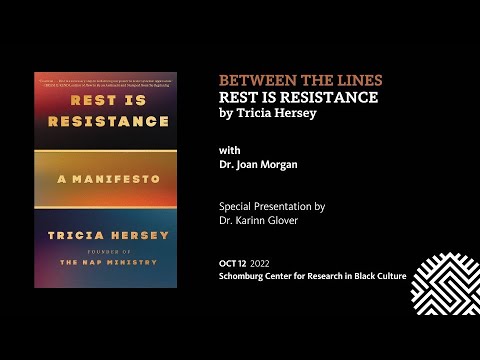 Live from the Schomburg Center Langston Hughes Auditorium on Oct.12, 2022.

Tricia Hersey invites readers to reimagine the foundations for liberation, healing, and justice. Rest as Resistance “casts an illuminating light on our troubled relationship with rest and how to imagine and dream our way to a future where rest is exalted.” Hersey will be joined by Dr. Joan Morgan, Program Director of the Center for Black Visual Culture (CBVC) at New York University. This fall the CBVC, inspired by Hersey’s liberatory framework of “rest is resistance,” will launch The Black Rest Project (BRP) to amplify visual narratives of Black rest and leisure.

Signed copies of Rest is Resistance by Tricia Hersey, will be available for purchase from The Schomburg Shop in Harlem.

FREE AND OPEN TO THE PUBLIC. As a courtesy to our participants we ask that you plan to wear your mask for the duration of the program while inside the Langston Hughes Auditorium.

This event is presented in partnership with the Center for Black Visual Culture (CBVC) at New York University.

The program will also be live streamed to our YouTube channel.

P﻿ARTICIPANTS
TRICIA HERSEY is a Chicago native who has called Georgia home for the last 12 years. She has over 20 years of experience as a multidisciplinary artist, writer, theologian and community organizer. She is the founder of The Nap Ministry, an organization that examines rest as a form of resistance and reparations by curating spaces for the community to rest via community rest activations, immersive workshops, performance art installations, and social media. Her research interests include Black liberation theology, womanism, somatics, and cultural trauma. She is the author of the upcoming book Rest is Resistance: A Manifesto which will be published in October 2022. You can learn more about her work and the book at thenapministry.com

DR. JOAN MORGAN is the Program Director of the Center for Black Visual Culture at New York University. She is an award-winning cultural critic, feminist author, Grammy nominated songwriter and a pioneering hip-hop journalist. Morgan coined the term “hip-hop feminism” in 1999, when she published the groundbreaking book, When Chickenheads Come Home to Roost: A Hip-Hop Feminist Breaks it Down which is taught at universities globally. Regarded internationally as an expert on the topics of hip-hop, race and gender, Morgan has made numerous television, radio and film appearances — among them HBOMax, Netflix, Lifetime, MTV, BET, VH-1, CNN, WBAI’s The Spin and MSNBC. She has written for numerous publications including Vibe, Essence, Ms., The New York Times, and British Vogue.

GET THE BOOK
Readers who wish to purchase Rest is Resistance by Tricia Hersey, can do so in-person from The Schomburg Shop in Harlem. All proceeds benefit The Schomburg Center for Research in Black Culture.

Between the Lines: Rest is Resistance by Tricia Hersey image
Disrupt and push back against capitalism and white supremacy. In this book, Tricia Hersey, aka The Nap Bishop, encourages us to connect to the liberating power of rest, daydreaming, and naps as a foundation for healing and justice.

What would it be like to live in a well-rested world? Far too many of us have claimed productivity as the cornerstone of success. Brainwashed by capitalism, we subject our bodies and minds to work at an unrealistic, damaging, and machine‑level pace –– feeding into the same engine that enslaved millions into brutal labor for its own relentless benefit.

In Rest Is Resistance, Tricia Hersey, aka the Nap Bishop, casts an illuminating light on our troubled relationship with rest and how to imagine and dream our way to a future where rest is exalted. Our worth does not reside in how much we produce, especially not for a system that exploits and dehumanizes us. Rest, in its simplest form, becomes an act of resistance and a reclaiming of power because it asserts our most basic humanity. We are enough. The systems cannot have us.

This book is rooted in spiritual energy and centered in Black liberation, womanism, somatics, and Afrofuturism. With captivating storytelling and practical advice, all delivered in Hersey’s lyrical voice and informed by her deep experience in theology, activism, and performance art, Rest Is Resistance is a call to action and manifesto for those who are sleep deprived, searching for justice, and longing to be liberated from the oppressive grip of Grind Culture.

2 thoughts on “Between the Lines: Rest is Resistance by Tricia Hersey”