Setting Up a Campaign Trigger 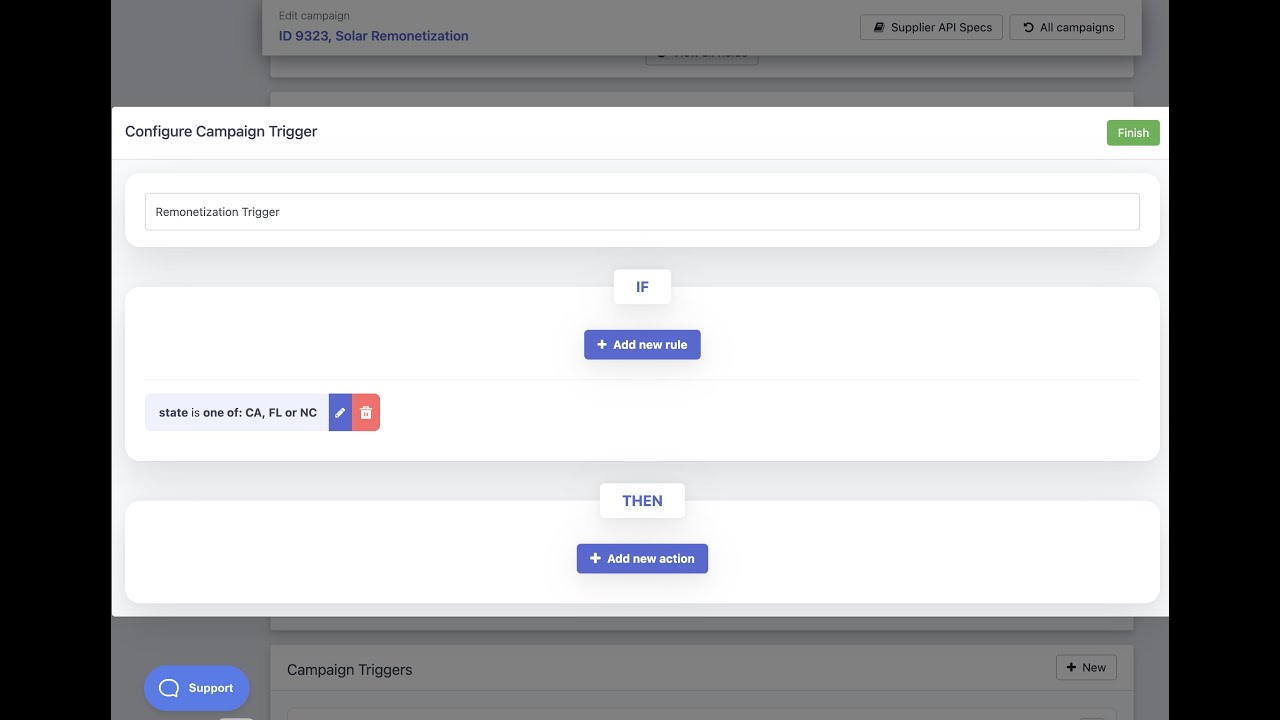 In this video we’re going to walk you through Campaign Triggers — a powerful new feature that can accomplish a dizzying variety of different tasks in Lead Prosper.

Today, we’re going to create a basic trigger designed to route failed or duplicate leads from one campaign with strict buyers to another whose buyers are looking for a different type of lead. This is a very common use case, and it can help you minimize the number of leads in a datastream that “hit the floor” or go unmonetized.

To set up a Campaign Trigger, go to the Campaigns Tab and click the campaign you want to edit. I’ll be routing fails and dupes from this Demo Solar Campaign into the Solar Remonetization campaign I’ve created below, so I’ll open both of these campaigns.

In the Demo Solar Campaign, leads are coming in from Solar Supplier 1 and being sold to Solar Buyer 1 and Solar Buyer 2. If we scroll down to our Filters, we can see that Solar Buyer 1 is only looking for leads in California, Florida, North Carolina, and South Carolina, and both buyers only want leads who responded to a question about the amount of shade on their roof with either “No Shade” or “Partial Shade.” Thanks to this filter, the leads who have heavily shaded roofs will Fail.

Now, say we’ve found two other buyers who are both willing to buy these leads for $10 — maybe they install heat pumps or other energy efficiency upgrades that might interest leads who aren’t good candidates for solar. Whatever their reasons, we’re going to round robin leads that fail the first campaign to our two buyers in the second campaign so they both get an even number of the available leads.

The $10 these buyers pay won’t recoup the full cost of a failed lead, which we’re buying from Solar Supplier 1 for $25 each, but it will help minimize losses and boost our average revenue per lead.

To build the Trigger, scroll to the bottom of the Campaign and click New, and then give your Campaign Trigger a name that makes its purpose clear.

For this example, I’ll call the trigger “Remonetization Trigger.”

Click + Add a New Rule. I’ll choose Lead Status to build out this rule, but you can see that there are a lot of different criteria to choose from when creating your triggers.

I’m picking the condition Any one of to ensure that both Duplicate leads and Errors are being sent, and now that I’ve defined the scope of the trigger and Added it, I can create a new action.

Because I want to post these leads directly into the other campaign, I’ll keep the HTTP option and name the action “Send to Remonetization Campaign.” Now, I’ll need the API specs for my second campaign in order to post into it.

I have my two buyers already set up in this campaign, but to generate API specs and post into it, I need to add a Supplier. Click this button and create a new Supplier — in this case, I’ll call it “Demo Solar Campaign Remonetization Trigger.”

Once I’ve added the Supplier, I can generate API specs to ingest leads into this campaign. This gray area, the payload in our trigger, already contains our fields and the dynamic data we’re trying to send. I’ll just copy these fields, “lp_campaign_id, lp_supplier_id, Back in the trigger, I’ll put in the posting URL, copy the lp_campaign_id, lp_supplier_id, and lp_key, that identify the solar remonetization campaign, along with these two blank lp_subid fields in case I want to use them later. Paste them into the payload of the trigger, ensuring the formatting matches the JSON or Form requirements. Click Add, Finish, and we’re done.

Now, when a lead comes into the solar campaign and is labeled a fail or a duplicate, it’s automatically routed to our round robin remonetization campaign and sent to one of our two floor buyers.

This is just one example of why you might want to set up a Campaign Trigger. Other use cases might be sending data back to an affiliate tracking platform such as Everflow or a CRM, which used to require you to set up the same webhook for every buyer in your campaign. You might also want to create an action if a lead sells for a price above or below a threshold you set. With Campaign Triggers, the possibilities are endless. If you have a use case that you think is valuable, feel free to let us know and we’ll share it with our users.

If you have any questions about Campaign Triggers or any other aspect of the Lead Prosper platform, submit a support ticket or email us at support@leadprosper.io. Thanks for watching!